In all my days of fascination with clay, there is one tool that I would call my tool of choice: the wheel. But the two things that have influenced me most are my teachers and my travels. Over the past thirty years or so I have had the great fortune of traveling throughout the world.  My interest in large format pottery began in the early 90s and quickly became one of the key purposes of my explorations.

There are many ways to build a large, ceramic container.  In Thailand, I watched two assistant potters feed a rope of clay the size of my leg and 20’ long, over their shoulders to a master potter, who would very slowly spin a crude wheel and pinch the coils on top of each other.   This seems to be the most common way cultures build large terra cotta containers. 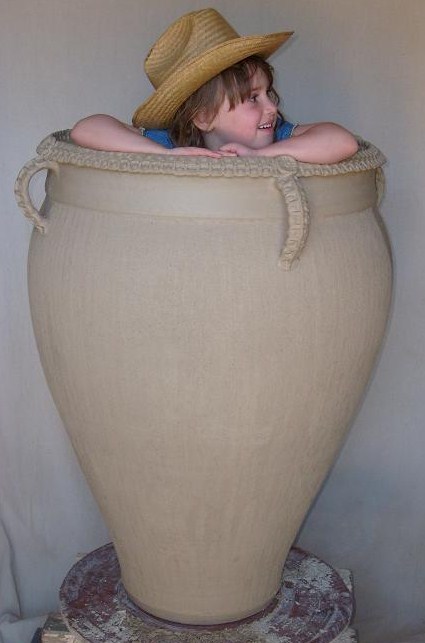 Recently I was a guest artist at a conference where, over the course of three days I made a 7’ Amphora using two wheels. I was positioned next to next to a family of Koreans who were making traditional Kimchi fermentation jars. These things were huge! They used the same coil/pinch method, but paddled the shapes into the forms.   In Georgia (Eastern Europe), they have been fermenting red wine for thousands of years in enormous ceramic vases called Qvervi; they use the same method. Spain probably has the largest pots I’ve ever seen called Tinajas. These absolutely spectacular containers are also used for fermentation,  as well as storing water.

Throughout my travels I have found that around the world, large terracotta forms are still produced for a great variety of uses.

Scott Semple is an internationally recognized ceramic artist with over 40 years of experience working with clay. He is referred to as a "Large Format Potter" and known for large-scale throwing. Scott is also an arts activist and educator who currently divides his time between the classroom, the studio, and the natural world.

The Annex is Open